Orlando and Central Florida are known globally as the Theme Park Capital of the World. The rich history of tourism, amusements, and entertainment in the area has a longstanding history spanning far before Walt Disney World opened in 1971.

Beginning as early as the mid-1800s, only wealthy or famous people could afford to travel to Florida to enjoy the natural beauty, coral reefs, fishing, sandy beaches, everglades, warm weather, and some even to recover from illnesses.

With the invention of the automobile and widespread use in the 1920s, travel became easier and therefore the tourism industry really took off. The first tourists were called “Tin Can Tourists” who were known for sleeping in their automobiles, camping, and eating food out of cans or “tins”. Florida’s first theme park / amusement park, Cypress Botanical Gardens, opened in 1936 in Winter Haven, Florida. The park featured rolling hills of beautifully landscaped native and exotic plants. It was also known for its water ski shows and eventually touted as the Water Ski Capital of the World. The park closed in 2003 and was bought by LEGOLAND in 2010. Areas of the gardens are still displayed at LEGOLAND and a tribute to the historic water ski shows is still performed by LEGO Pirate characters. Weeki Wachee Springs opened as a roadside attraction in 1947

The Weeki Wachee Springs roadside attraction was founded in 1947 by Newton Perry, a former US Navy man. Perry discovered an underwater breathing method using a free-flowing air hose supplying oxygen. He trained beautiful “mermaids” to perform synchronized ballet moves underwater while secretly using the breathing method – appearing to be real mermaids. Today, you can still watch the mermaid shows from the underwater theater. Now known as the Alligator Capital of the World, Gatorland opened in 1949 by Owen Godwin and his wife Pearl. It opened with alligators, snakes, a Native American Village, and Bone Crusher, the “Largest Crocodile In The World”. Florida’s first and longest continuously operating ride opened in 1965 – The Gatorland Express Train. Today the park features thrilling ziplining over hundreds of alligators, rare white alligator exhibits, a splash park, animal exhibits, shows, and alligator wrestling. Tours of the Cape Canaveral’s Space Shuttle launch sites began in 1963 with a driving tour on Sunday afternoons. Tourists could drive by shuttle launch pads and launch operations center facilities and observe from their personal vehicles. In January 1966, public bus tours were offered to include the Kennedy Space Center, the location of all of NASA’s space flights and launch operations. The Visitor Information Center opened in 1967 spanning 42 acres and featuring exhibits, theaters, and replicas of hardware. In 1997, the Apollo / Saturn V center opened, which was the first time a major exhibit was opened within a restricted area.

In 2010, the popular Wizarding World of Harry Potter was added to the Islands of Adventure theme park which expanded to include Hogsmeade at Universal Studios in 2014. In 2019, it was announced that a third theme park called Universal’s Epic Universe will be built just a few miles down the road from the Universal complex. 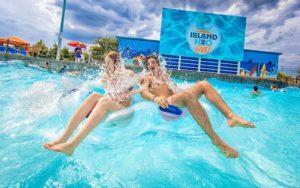